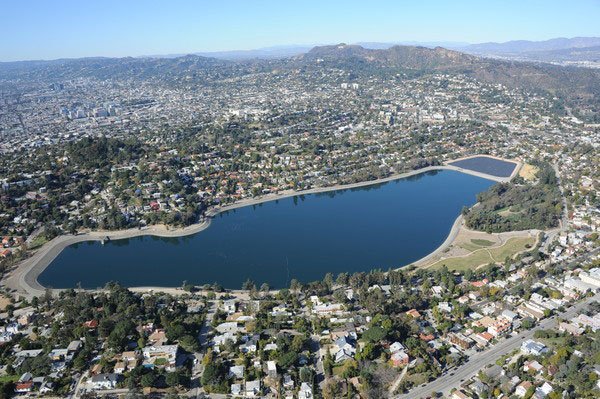 Silver Lake is a residential and commercial neighborhood in the central region of Los Angeles, California, built around a city reservoir which gives the district its name. The “Silver” in Silver Lake is not because of the water’s color, but named for the local engineer who built the reservoir. It’s known for its restaurants and clubs, and many notable people have made their homes there. The neighborhood has three public and four private schools.
Silver Lake is flanked on the northeast by Atwater Village and Elysian Valley, on the southeast byEcho Park, on the southwest by Westlake, on the west by East Hollywood and on the northwest by Los Feliz.

Street and other boundaries are: the Los Angeles River between Glendale Boulevard and Fletcher Drive and Riverside Drive on the northeast, the Glendale Freeway on the east, Effie Street, Coronado Street, Berkeley Avenue and Fletcher Drive on the southeast, the Hollywood Freeway on the south, Hoover Street on the west and Fountain Avenue and Hyperion Avenue on the northwest. The prime real estate around the lake is known by realtors as the “Moreno Highlands.

The 2000 U.S. census counted 30,972 residents in the 2.75 square miles (7.1 km2) neighborhood—an average of 11,266 people per square mile, about the same population density as in the rest of the city. In 2008 the city estimated that the population had increased to 32,890. The median age for residents was 35, about average for Los Angeles, but the percentages of residents aged 19 to 49 were among the county’s highest.

The median yearly household income in 2008 dollars was $54,339, about the same as the rest of Los Angeles, but a high rate of households earned $20,000 or less per year. The average household size of 2.3 people was low for the city of Los Angeles. Renters occupied 64.3% of the housing stock, and house or apartment owners the rest.

Thirty-six percent of the neighborhood residents aged 25 and older had earned a four-year degree by 2000, an average figure for the city.

The schools within Silver Lake are as follows:

The Silver Lake District is also served by the Silver Lake Branch of the Los Angeles Public Library. It is located in northeastern Silver Lake between the reservoir and the I-5 freeway.