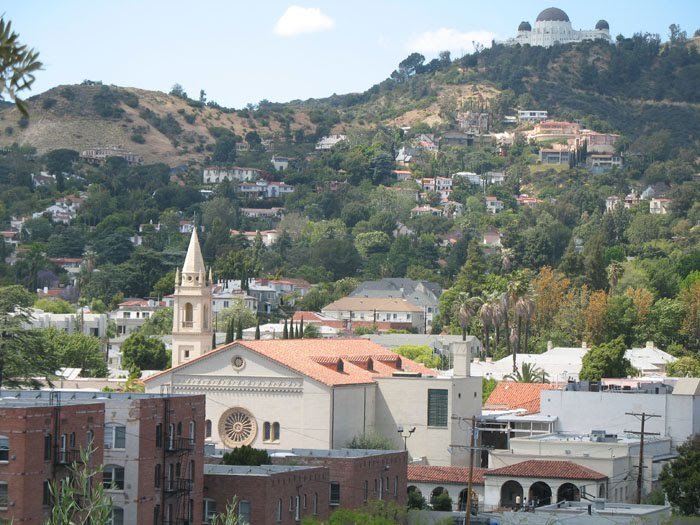 Los Feliz is an affluent hillside neighborhood in the central region of Los Angeles, California, abutting Hollywood and encompassing part of the Santa Monica Mountains. It is noted for its expensive historic homes and celebrity inhabitants.

The neighborhood is named after its colonial Spanish-Mexican land grantee, José Vicente Feliz, and, along with present-dayGriffith Park, makes up the original Rancho Los Feliz land concession.

The 2000 U.S. census counted 35,238 residents in the 2.61-square-mile neighborhood—an average of 13,512 people per square mile, among the highest population densities in Los Angeles County. In 2008 the city estimated that the population had increased to 36,933. The median age for residents was 36, older than in the city as a whole; the percentage of residents aged 65 and older was among the county’s highest.

The median yearly household income in 2008 dollars was $50,793, about the same as the rest of Los Angeles, but a high rate of households earned $20,000 or less per year. The average household size of two people was low for the city of Los Angeles. Renters occupied 75.5% of the housing stock, and house or apartment owners the rest.
The percentages of never-married men (50.2%) and never-married women (37.2%) were among the county’s highest, as was the percentage of widowed women (10.1%).

Forty-two percent of Los Feliz residents aged 25 and older had earned a four-year degree in 2000, a high figure for the city.

The schools within Los Feliz are as follows:

Los Feliz Village is home or in proximity to numerous bars and restaurants catering to nightlife. They are mostly located on Hillhurst Avenue between Los Feliz Boulevard and Prospect Avenue, and on Vermont Avenue between Franklin Avenue and Hollywood Boulevard. Some were classic dive bars in their heyday, frequented by the likes of Charles Bukowski, Lawrence Tierney, sundry working-class drunks, poets, artists, writers, and other creative types.

Buena Vista Street, the new entrance to the California Adventure theme park at the Disneyland Resort, is partly modeled after Los Feliz in the 1920s, when Walt Disney first arrived and set up shop in Los Angeles, initially in the garage of his aunt and uncle’s Los Feliz house. The area had special importance to Disney because his original animation studios were located here before moving to their present location in Burbank. The Disney Buena Vista Street even includes a retail location called Los Feliz Five and Dime.