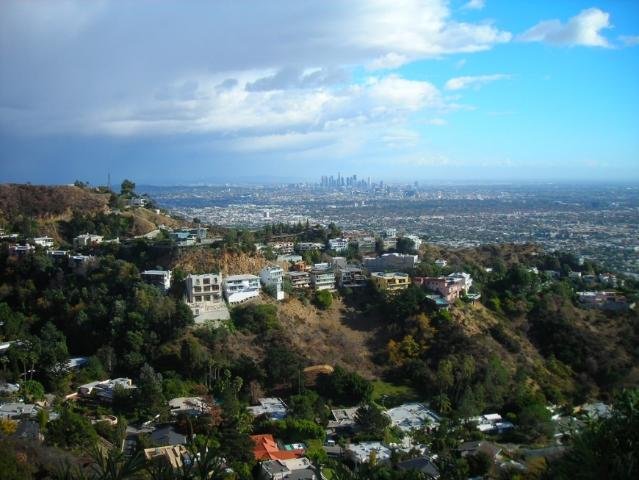 The Hollywood Hills are a part of the Santa Monica Mountains and also a hillside neighborhood of the same name in the central region of the City of Los Angeles, California.

It is notable for its views of Los Angeles, and its expensive homes and celebrity inhabitants. It also has several recreational areas and a rich history as the home of many members of the motion picture industry.

Hollywood Hills is bisected southeast-northwest by US 101. The neighborhood is bounded on the northwest and north by the Los Angelescity line, on the east by a fireroad through Griffith Park, continuing on Western Avenue, on the south by Franklin Avenue and on the west by an irregular line that includes Outpost Drive.

A total of 21,588 people lived in the neighborhood’s 7.05 square miles, according to the 2000 U.S. census—averaging 3,063 people per square mile, among the lowest population densities in the city or the county. The population was estimated at 22,988 in 2008. The median age for residents was 37, considered old for the city and the county. The percentages of residents aged 19 through 64 were among the county’s highest.

The neighborhood is “not particularly diverse” for the city, the diversity index being 0.433, and the percentage of white people is considered high, at 74.1%. Latinos make up 9.4%, Asians are at 6.7%, blacks at 4.6% and others at 5.3%. In 2000 Mexico (7.9%) and the United Kingdom (7.8%) were the most common places of birth for the 22.8% of the residents who were born abroad, which was considered a low percentage of foreign-born when compared with the city or county as a whole.

The median household income in 2008 dollars was $69,277, considered high for the city but about average for the county. The percentage of households earning $125,000 or more was high, compared to the county at large. The average household size of 1.8 people was relatively low. Renters occupied 56.5% of the housing units, and homeowners the rest.

In 2000, 54.8% of residents aged 25 and older held a four-year degree, considered high when compared with the city and the county as a whole.

There are five secondary or elementary schools within the neighborhood’s boundaries: