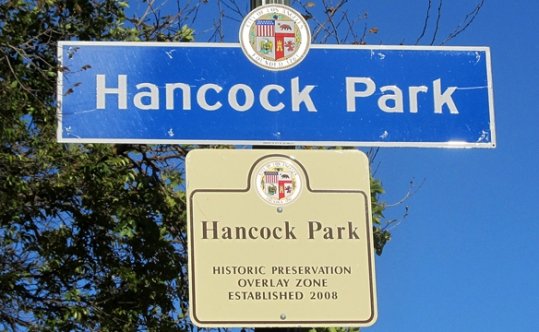 Hancock Park is a historic and affluent residential neighborhood in the central region of the City of Los Angeles, California. It is built around the grounds of a private golf club. Developed in the 1920s, the neighborhood features architecturally distinctive residences.
The neighborhood is low density, with a 70.7% white, highly educated, older-aged population of 10,600+ people. Most of the residents are home owners. There are four private and two public schools in the area.

Hancock Park is flanked by Hollywood to the north, Larchmontand Windsor Square to the east, Koreatown to the southeast, Mid-Wilshire to the south and southwest and Fairfax to the west. Street boundaries are Melrose Avenue on the north, Arden Boulevard on the east, Wilshire Boulevard on the south and La Brea Avenue on the west. The neighborhood surrounds the grounds of the Wilshire Country Club.

Today, the Hancock Park Homeowners Assn. counts about 1,200 homes within the boundaries of Melrose Avenue, Wilshire Boulevard and both sides of Highland and Rossmore avenues. The association’s board of directors includes six Jews among its 16 current members, Marguerite Byrne said

The 2000 U.S. census counted 9,804 residents in the 1.59-square-mile neighborhood—an average of 6,459 people per square mile, including the expanse of the Wilshire Country Club. That figure gave Hancock Park one of the lowest densities in Los Angeles. In 2008, the city estimated that the population had increased to 10,671. The median age for residents was 37, considered old when compared with the city as a whole; the percentages of residents aged 35 and above were among the county’s highest.

Hancock Park was moderately diverse ethnically. The breakdown was whites, 70.7%; Asians, 13.1%; Latinos, 8.5%; blacks, 3.8%, and others, 3.9%. Korea and the Philippines were the most common places of birth for the 26.3% of the residents who were born abroad, a figure that was considered low compared to rest of the city.

The median yearly household income in 2008 dollars was $85,277, a relatively high figure for Los Angeles, and a high percentage of households earned $125,000 or more. The average household size of 2.1 people was low for the city of Los Angeles. Renters occupied 52.7% of the housing units, and house- or apartment owners 47.3%.

Hancock Park residents were considered highly educated, 56.2% of those aged aged 25 and older having earned a four-year degree. The percentage of residents with a master’s degree was high for the county.

The schools operating within the Hancock Park borders are: