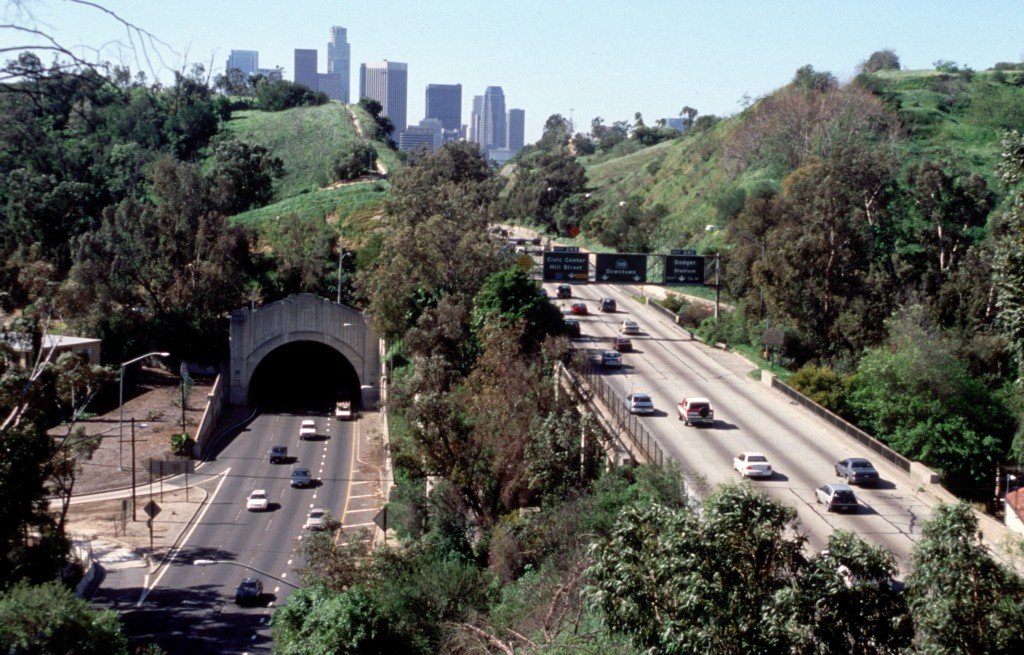 Elysian Park is the name of a municipal park and the adjacent neighborhood in Central Los Angeles, California.
Encompassing Chavez Ravine, where Dodger Stadium is located, the neighborhood is mostly a low-income community of 2,600+ people. It is also home to the city’s first Catholic high school, an elementary school and the Los Angeles Police Academy.
The Elysian Park neighborhood is flanked on the north and northeast by Elysian Valley, on the east by Lincoln Heights, on the southeast and south by Chinatown and on the southwest, west and northwest by Echo Park.[2] Street and other boundaries are: the northern apex at Exit 138 of the Golden State Freeway, thence southeasterly along the freeway, southerly along the Los Angeles River, westerly along North Broadway, northwesterly along Stadium Way, Academy Road and northerly along Elysian Park Drive.
The 2000 U.S. census counted 2,530 residents in the 1.65-square-mile neighborhood, which includes all the city park land as well as Dodger Stadium—an average of 1,538 people per square mile, one of the lowest population densities in Los Angeles county. In 2008 the city estimated that the population had increased to 2,659. The median age for residents was 31, about average for Los Angeles; the percentage of residents aged 11 to 18 were among the county’s highest.
The neighborhood was moderately diverse ethnically, and the percentage of Asians was comparatively high. The breakdown was Latinos, 47.6%;Asians, 43.4%; whites, 3.1%; blacks, 2.1%, and others, 3.7%. China (32.3%) and Mexico (27.3%) were the most common places of birth for the 54.4 % of the residents who were born abroad, a high figure compared to rest of the city.
The median yearly household income in 2008 dollars was $28,263, low for Los Angeles; a high percentage of households had an income of $20,000 or less. The average household size of 3.1 people was high for the city of Los Angeles. Renters occupied 81.9% of the housing stock, and house- or apartment owners 18.1%.
Thirteen percent of the neighborhood residents aged 25 and older had earned a four-year degree by 2000, an average figure for the city.
The schools operating within the Elysian Park neighborhood borders are:
Cathedral High School, private, 1253 Bishops Road. It was founded by Archbishop John Joseph Cantwell as the first Los Angeles Archdiocesan high school for boys in fall 1925. The Christian Brothers have operated the school since its opening. It was designated Los Angeles Historic-Cultural Monument number 281 in 1984.
Solano Avenue Elementary School, LAUSD, 615 Solano Avenue

The park is the second largest park in Los Angeles at 600 acres (2.4 km²). It is also the city’s oldest park, founded in 1886 by the Elysian Park Enabling Ordinance. It hosted the shooting and the shooting part of the modern pentathlon events for the 1932 Summer Olympics.[1]In 1964 the Citizens Committee to Save Elysian Park was founded to prevent the City of Los Angeles from constructing the Municipal Convention Center on 62 acres (250,000 m2) of park land. In 1967, it hosted a hippie “Love-In”. Parkside residents enjoy the large and fruitful avocado trees that grow in the park.
The Figueroa Street Tunnels take northbound State Route 110 (the Pasadena Freeway) through the park.